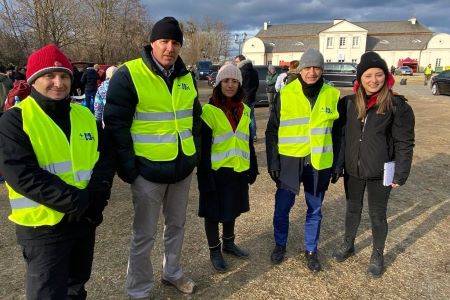 With more than a million Ukrainian refugees streaming across the border into Poland, a delegation from the Hadassah Medical Organization (HMO) left Israel on March 7. Their destination was the Medical University of Lublin, the city’s largest hospital just 70 miles from Poland’s border with Ukraine. The doctors’ mission: to help treat the injured and confer with their Polish colleagues in an attempt to assess the overwhelming resource and personnel needs created by the crisis across the border.

In Poland, the Hadassah doctors are sharing their hard-won expertise in triaging trauma patients, caring for victims of missile and rocket attacks, and handling sudden large influxes of patients injured in war and terrorist attacks. It is expected that the next wave of refugees will consist of the more disadvantaged and weaker populations than those who had the means to flee in the days immediately following the outbreak of the war.

Yevgen Korniychuk, Ukraine’s ambassador to Israel, expressed his gratitude to Hadassah for its efforts on behalf of the Ukrainian refugees.

The delegation is part of a joint humanitarian effort launched last week by HMO, Hadassah International, and Hadassah, The Women’s Zionist Organization of America (HWZOA). Supporters of Hadassah recently contributed $25,000 to purchase medical supplies that were airlifted to the Polish border with the help of the Ukrainian Embassy in Tel Aviv. Hadassah’s medical facilities are prepared to treat injured and traumatized refugees being flown to Israel from hospitals in neighboring countries. All three organizations have launched fundraising campaigns to support these ongoing efforts.