Honoring the Year of the Nurse: Nursing Success Despite Obstacles 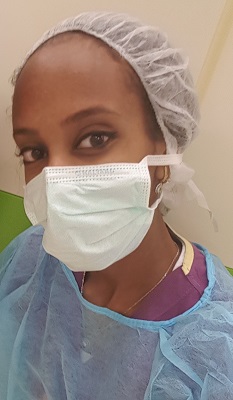 Esther Ingadao’s parents left their Ethiopian village bound for Israel in 1984. Hundreds of miles away, in the deserts of Sudan, three of her uncles died from starvation and heat stroke. There, her mother gave birth to one of her siblings. The family arrived in Israel with nothing more than the clothes on their back, torn and faded from the journey.

As small children, Inbal Hanania’s parents made the trek separately in 1981. They walked hundreds of miles.

Yehudit Yirmias’ parents made aliyah in 1991 with six children. She is one of four more born in Israel.

Their parents shared the dream of moving to Israel. Esther, Inbal, and Yehudit shared a different dream—to become hospital nurses in Israel.

They also shared a seemingly impossible hurdle. Like many Ethiopian-background Israelis, their psychometric scores, similar to the SATs, were too low for acceptance, despite good school grades and other achievements. Because of a unique program funded by Hadassah, all three of these young women, plus nine classmates, are now completing their third year of the bachelor of nursing program at the Henrietta Szold Hadassah-Hebrew University School of Nursing.

At the suggestion of the non-profit JobKatif, Hadassah funded the Achotenu (a pun that means our sisters as well as our nurses) program, thanks to a bequest from Patricia Lapan, an American nurse who went on to become a businesswoman, lawyer, and even a pilot.

Lapan never forgot where she came from or the importance of offering opportunities to others. That’s why she made a generous gift in her will to Hadassah before she passed away in 2012. That gift funded the Patricia Lapan Hadassah-Hebrew University School of Nursing Scholarship Program.

Subsequently, Hadassah Australia joined the effort to ensure Ethiopian would-be nurses would not fall at the first hurdle.

Irit Sorek, a senior lecturer in the School of Nursing, coordinates the Achotenu program.

“The nurses who come from a background of storytellers make great listeners, an essential characteristic of good nurses,” says Sorek. “They add a refinement and attentiveness that’s unique. They excel on the wards. They develop a relationship with patients based on empathy and patience.”

“I think I want to start in internal medicine,” says Ingadao. “That’s where you really learn on the job. Then I’d like to study for a master’s degree, and I couldn’t do any of that were it not for Hadassah.”

Since she began working in the wards, Hanania has begun to think about which aspects of medicine she wants to concentrate on. “My mind remains open but pediatrics, surgery, and trauma might be the way forward.”

Yirmias says she falls in love with each of the specialties as she is exposed to them. “Whichever specialty I am currently studying is the one I like best. Who could imagine that I would be faced with such wonderful life choices?”