One in 200,000: Identical Triplets Born at Hadassah Hospital Mount Scopus 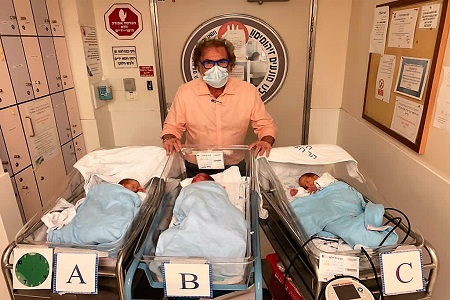 Last year, Tamar gave birth to a stillborn baby. When she became pregnant again, she initially didn’t rush to have an ultrasound because of the pandemic. But she wanted to make sure there was a heartbeat, and so she went to Hadassah Hospital Mount Scopus for that ultrasound. There were three heartbeats—belonging to three identical babies!

There is a one in 200,000 chance of having identical triplets, where a single egg splits and then one splits again. Monitoring the pregnancy can take hours because the medical team has to make sure the same heartbeat is not counted twice. Tamar says she felt secure from the moment she entered Prof. Simcha Yagel‘s clinic. Prof. Yagel, who is head of Hadassah’s Division of Obstetrics and Gynecology, reports that the triplets were delivered by cesarean section during Tamar’s 35th week of pregnancy.

Tamar and her husband, Moshe, have six other children at home.